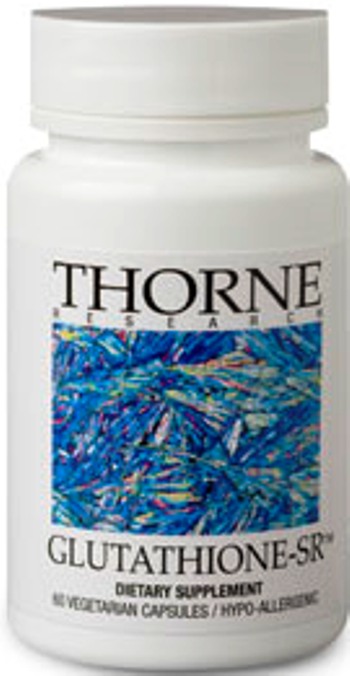 Contact us if you have any questions or concerns about your health or products. Our staff is highly trained and board certified in modern and alternative medicine.

An important breakthrough in glutathione supplementation - the sustained-release formula; the body's most important antioxidant and detoxification factor*

Glutathione-SR
Sustained-release glutathione for essential antioxidant support*
Available exclusively from Thorne Research
Sustained-release glutathione for optimal blood levels*
An important breakthrough in glutathione supplementation - the sustained-release formula allows twice-daily supplementation
The body's most important antioxidant and detoxification factor*
Reduced glutathione (GSH) occurs naturally in all human cells. GSH is a cofactor for dozens of enzymes involved in detoxification.* As an antioxidant, it directly quenches several reactive oxygen species (free radicals).* Numerous structures and functions in the body receive benefit from maintaining normal levels of glutathione, such as hepatic support, pulmonary health, immune function, bowel health, carbohydrate metabolism, cardiovascular health, cognitive health, and eye health.*
The liver is the largest reservoir for glutathione in the body. A potent endogenous antioxidant, glutathione is essential for phase I and phase II liver detoxification.* Unfortunately, lifestyle issues and conditions that negatively affect liver health usually result in a decreased amount of liver glutathione.
Maintaining optimal levels of glutathione appears to be important for supporting cognitive function, especially as we age.* The normal process of aging is associated with a decrease in glutathione regulation, which can result in increased oxidative activity.* Less than optimum levels of glutathione are observed in individuals experiencing a decline in cognitive function.* Conversely, individuals living over 100 years tend to have higher glutathione reductase activity.*
A common mistaken belief is that glutathione is not well absorbed when it's taken orally, but significant data confirms it is efficiently absorbed across the intestinal epithelium by a specific uptake system.*

Glutathione-SR from Thorne Research represents an important breakthrough in glutathione supplementation. Absorption of oral glutathione can be affected by stomach acid or enzymes in the duodenum, which can break glutathione into its amino acid components. However, the sustained-release properties of Thorne Research's Glutathione-SR protect it from stomach acid and digestive enzymes, allowing slower release and a more steady level in the blood of this essential nutrient.*

Suggested Use: Take 1 capsule two to three times daily or as recommended by a health-care practitioner.