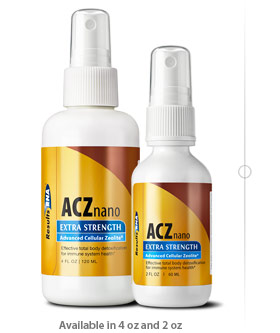 ACZ nano Extra Strength is the only detoxification product formulated to remove fluorine and chlorine, two of the strongest oxidizing agents known and found in most drinking water.
Greater Surface Area

Patient response is very positive and readily discernible. Physicians who prescribe ACZ nano Extra Strength do so repeatedly as a core component of every functional protocol.
Clinical Research

ACZ nano is the only zeolite-based detoxification formula with proven clinical research.

Therapeutic Dose Take 12 sprays by mouth, twice daily. • Spray, swish and swallow. You may take other Results RNA formulas immediately. • Do not eat or drink for 2 minutes following. • Take as recommended by your physician. • Remain well hydrated while taking ACZ Nano.