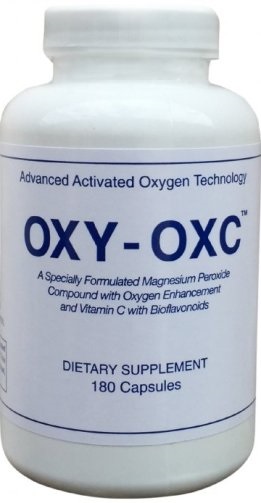 Oxy Oxc Magnesium Peroxide - Stabilized Oxygen, 35% food grade hydrogen peroxide - provides a high quality, reliable source of the most essential element on earth, oxygen. There is no other substance on earth other than oxygen that we are so dependent on. We breathe it, drink it and consume it in our foods and today we can even supplement with it.

Probably, the most common effect of OXYGEN is a feeling of increased energy.** In today's environment, oxygen levels in our atmosphere are reduced by about 50% from what they used to be. Mineral deficiencies, pollutants, overeating, infections and stress can cause increase needs for oxygen. OXYGEN contains singlet oxygen equivalent to twelve drops of 35% food grade hydrogen peroxide oxygen.

When hydrogen peroxide enters the blood stream, catalase enzyme immediately breaks it down into water and atomic or single oxygen. This singlet oxygen does not exist long enough in the body to harm cells. It is normally produced by healthy white blood cells to literally kill invading bacteria as the singlet oxygen stimulates the oxidation-reduction cycle, which includes detoxification functions in the body, as well as the destruction of anaerobic pathogens.

The earth is composed of over 100 elements and the most abundant of all of them is oxygen. Oxygen is absolutely essential for the existence of all living matter. We can go for weeks without food and days without water but we cannot live over four minutes without oxygen. There is no other substance on earth that we are so dependent on for our existence. In addition, all living matter contains oxygen, which is combined with other elements, not only as water in all cellular and circulatory fluids, but also as a component of all organic compounds such as carbohydrates (sugars, starches, cellulose, and fiber), glycogen, fats and proteins. Even the clay and rock structures of our soils are loaded with oxygen-containing compounds in the form of oxides, hydroxides, carbonates, sulfates and others.

HOW DO WE GET IT

We mostly think of the oxygen in the air we breathe, but it is everywhere. However, it is a major component in the water we drink and an ingredient of tens of thousands of different molecules that make up our foods. We breathe it, drink it and consume it in our food. Today, we can even supplement with it.

THE KINDS OF OXYGEN

In its simplest form, oxygen is an atom that exists as one atom all by itself and is referred to just as "O" (singlet oxygen). The most well known and most common form of oxygen is when two atoms of oxygen combine to make molecular oxygen known as O2.

Many attempts have been made by medical researchers to provide oxygen to the tissues of the body. Hyperbaric chambers have been developed to put oxygen under pressure, forcing it into the tissues and blood stream. Ozone is a very reactive form of oxygen that contains three atoms of oxygen and is symbolized by O3. Hydrogen peroxide has been given extensively, both orally and intravenously.

A commonly misunderstood aspect of hydrogen peroxide is that it is a free radical. This is simply not true. By definition, a free radical has an unpaired electron. They are very short lived, usually only one ten-thousandth of a second. If left unchecked, they can cause damage, but they also provide a much needed function in the body as well. Therefore, balance is always the key. When hydrogen peroxide enters the blood stream, catalase enzyme immediately breaks it down into water and atomic or singlet oxygen. As mentioned above, this singlet oxygen does not exist long enough in the body to harm cells. As a matter of fact, hydrogen peroxide is formed in the special white blood cells known as macrophages. They have a special enzyme called peroxisome, which produces hydrogen peroxide. The singlet oxygen they produce literally kills invading bacteria as the singlet oxygen stimulates the oxidation-reduction cycle, which includes detoxification functions in the body as well as the destruction of anaerobic pathogens.

Environmental contaminates in the air are not only harmful to every cell of our body, but also replaces the amount of oxygen percentage we breathe. This can result in various problems such as a sense of fatigue, the inability to concentrate, repair of damaged cells and the inability to fight off infection and degenerative diseases, such as cancer and heart disease, the leading causes of death today. Many researchers believe that the increased discomfort experienced by those suffering from arthritis before a storm or in more humid climates may result from a reduced amount of oxygen in the air.

Several factors contribute to oxygen depletion. One of the most overlooked factors that may be contributing to increased incidence of degenerative disease is the reduction of oxygen content of the air we breathe from about 35% to 19%. This is about a 50% reduction of the oxygen in the air around us. Mineral deficiencies are another factor. Minerals help inhibit the formation of toxins in our soils and the lack of minerals throws an extra burden on oxygen. In addition, overeating can cause oxygen deficiency as more oxygen is required to complete the digestive process and additional metabolic waste. Improper breathing contributes to the oxygen debt. All infections reduce oxygen reserves, and researchers have shown that fluoride in our drinking water slows down the process of oxidation of our foods.

Probably the most recognized result of decreased quality oxygen uptake in the body is the lack of energy and, on the other hand, increased energy levels are common place with higher levels. Even though the oxygen saturation in the veins of modern man is only 60-70%, some experts see a need for supplementing oxygen to supply up to the 80% range.