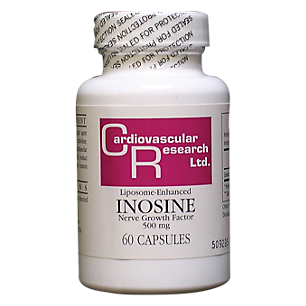 Inosine is a precursor to adenosine, an important energy molecule, and plays many supportive roles in the body. Inosine is a small molecule that helps restore nerve function and is one of the few supplements shown to help regrow nerve connections in laboratory animals. It is being used in research and by some physicians for patients with MS, stroke injury , brain injury and autism. It is most effective when administered at the time of injury. It is used in France and Russia to improve energy production in the heart.

In 2002, researchers at Harvard's Children's Hospital, lead by Dr. Larry Benowitz, began using Inosine to switch damaged nerve cells in the cerebral cortex into a growth state. In 2002, they reported that inosine helped stroke-impaired rats to regrow nerve connections between brain and spinal cord and partially recover motor function. Benowitz's team reported that inosine could cause nerve cells in rats to sprout new axons -- the tendrils that nerve cells reach out to one another with.

The protein, called inosine, acts as a kind of master switch to turn on a number of genes involved in the growth of nerve cells, the team at Boston's Children's Hospital and Harvard University reports. "Inosine switches on a whole constellation of genes," Dr. Larry Benowitz said.

Benowitz indicated his team found that inosine can cause severed nerves to regenerate axons in rats. "It juices them up nicely," he said, but adding that the experiment will have to be repeated before he can be sure it really works the way he thinks it does.

Benowitz said his team found in the latest experiment, published in the Journal of Neuroscience, that inosine passes through the nerve cell's membrane and activates an enzyme that in turn controls the cell's molecular program for axon growth.

"We think it is directly targeting and activating a protein kinase, an enzyme, inside the cell, that is the linchpin of the signaling pathway that activates growth," Benowitz said. Inosine promotes the production of a substance known as 2,3-DPG that is necessary for the transport of oxygen molecules from the red blood cells to body tissues for energy.

In 2004, Dr. Craig Hooper and colleagues at Thomas Jefferson University, Philadelphia, administered inosine to 11 people with MS in a study. Among 11 people taking inosine for 10 or 15 months, neurological exams showed some clinical improvement in three patients, and stability in 8 patients. Some areas of myelin damage seen on MRI in two patients could not be detected after treatment (Multiple Sclerosis, October 2001). Based on these findings, a larger study is underway at the University of Pennsylvania, comparing inosine to placebo in 30 people with relapsing-remitting MS.

Precaution: Although it has few or no side effects, inosine is broken down to the purine end-product, uric acid. Because of this, inosine supplements should not be used in people with a history of gouty arthritis, hyperuricemia or purine autism unless being monitored by a physician. Pregnant women and nursing mothers should also avoid its use.

Suggested Use: Take one or two capsules daily or as recommended by a health care professional.